Can Tyrone get some Brotherly Love? 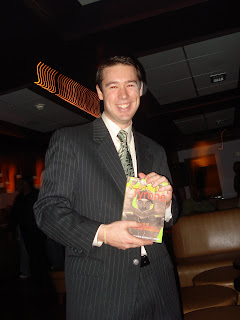 Philly, Dec. 8. Another city, another "Crash" moment. This one came courtesy of Ed, the manager of Haru, a chi-chi-fu-fu sushi-fusion spot in Philly where our girl Katrina made reservations for us to kick it after a DT reading. Clearly not realizing Katrina was black, Ed called her earlier in the day to warn her that a group had booked an event at the restaurant , so it wouldn't be the "usual Haru experience." Pressed to elaborate, Ed said it was going to be a "rappish, thuggish" vibe and mumbled something about somebody named Lloyd Banks. To be honest, we were ourselves scratching our heads wondering what the "bitty" was described on the event flier (as in, "Who is Sexiest Bitty in the City?") But the deejay was on point and the crowd didn't look any more thuggish than we did--The Natalies, a nonprofit exec, a physician, a political journalist and a white-collar government worker. We did get a kick out of seeing Ed squirm when Katrina introduced herself. OOOOOPS! Then we made Ed pose for this picture. To quote Maven: Please! Somebody! Help me!

Earlier that night, we read at the legendary Robin's Book in Philly. From jump, we had to work overtime to soften the furrowed eyebrows, crossed arms and foregone conclusions from the brothers on the front row. Other than one customer's lengthy soliliquy which started from Shaft, wandered over to Earth Wind and Fire, then concluded ten minutes later with an analysis of Ahhnold in Terminator, the discussion stayed on message: No, this is NOT a male-bashing book. But no, it's also not Angie Stone's song either. We are proud to say that the black men in the audience seemed to get that this was truly A New Look at our peers, coming from a place of love. We think it worked. We sold out all of the books in the store.

Imagine our surprise, then, that our toughest Philly critic turned out to be a black woman columnist who came to Robin's halfway into the reading and published a column about us the next week. Usually, we are just thrilled to have "Natalie" spelled without an 'h'. We shrugged when a couple academic types basically called us pseudo intellectuals. When a Detroit writer said we suffer from ADD, we took it in stride. But for this Inky columnist to accuse us of "Maligning Black Men," bringing to mind several notable contemporary novelists, their imitators and the crappy movie adaptations that followed---them is fighting words! Deep sigh. We promptly whipped up a letter to the editor, which the Philadelphia Inquirer told us is being considering for publication. We could not stand for such dribble to be floating around about DT based on half a book talk and apparently not reading past page 1 of the introduction, where we explain who Tyrone is. The Media! Huff.
Tyrone, we definitely feel your pain.
Posted by Unknown at 11:33 AM 1 comment:

Beyond Beats and Poppin' Bottles with Tyrone... 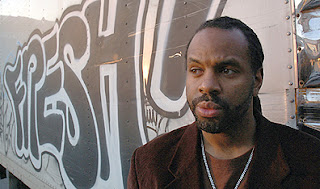 For weeks now, folks have been urging us to check out "Beyond Beats and Rhymes,"a new documentary by Byron Hurt (pictured to the right) which looks at hip-hop and masculinity. The thinking was that given the timing of the film and DT, our projects have the potential to have great synergy. So far that's been the case quite unintentionally: In November we appeared with Byron on Blackademics, a radio show on D.C.-based WPFW Pacifica radio station at the urging of host Shani. Our friend Lisa is trying to put together a panel discussion with Byron and us at a law school in the Spring. Well, On Dec. 2 while we were in Chicago for an event, The Natalies finally were able to check out a screening of the film at the Cultural Center. Long story short: Byron's documentary is terrific! Beyond Beats is a passionate multimedia essay in the vein of a muckraking Michael Moore which probes masculinity gone wrong in hip-hop. There have been others maybe most notably the performance artist Sarah Jones who have covered similar themes in the past, but we are hopeful that this particular sermon will reach beyond the choir. The most obvious reason is that the man behind the camera/microphone is a brother, a "real" brother, former college football player and Que dog, who is stepping to his peers, man to man, asking uncomfortable questions about the directions that hip-hop is going--coming from a place of love for the culture and concern for its future. Hip-hop afficionados will nod heads and enjoy the classic video clips and interviews with folks like Chuck D, Talib Kweli, Jadakiss, The Clipse, Russell Simmons, Busta Rhymes, Kevin Powell, Mos Def, De La Soul, William Jelani Cobb, Nelly, Mark Anthony Neal. Then we hear from countless anonymous hip-hop fans like revelers at Daytona Beach Spring Bling, trannies and white hip-hop fans on safari. We won't spoil the film but several high-profile hip-hoppers straight-up play themselves--especially when the subject of hypermasculinity, homosexuality and misogyny come up. Judging from all the awkward silences, eye-shifting, and stuttering that followed Byron's questions, many men of hip-hop are plain old scared to say they scared. Byron, thanks for a terrific film and showing how comfortably masculinity and awareness of gender issues can coexist in one body. We're sure The Natalies aren't the only ladies who have noticed how great it looks on you(: We look forward to crossing paths again in the future. The film airs in February on PBS; check out a clip HERE)

Earlier that day before we saw the screening on Dec. 2, we attended a brunch sponsored by the Windy City Chapter Links chapter, "Champagne Breakfast with Tyrone" at Pearl's Place on 39th Street. At least 75 people showed up and we got all teary -eyed up there, speaking in front of all of Nat. M's parents and old childhood friends, neighbors and even an English teacher!! We met Ginger, one of the B.A.P. girls who made a splash with their book and were generous with marketing advice early in our process with DT. After the bottles were popped we moved 100 units in one morning and could have done more. Thanks so much to Yvonne Moore, Nat M.'s mom who organized, and Alma Dodd who hosted us at her restaurant in Bronzeville and Aunt Joyce for a great, personal introduction. Thanks to Charese for taking us out afterward and Tom and Suzanne for coming out to kick it afterwards in the West Loop.
Posted by Unknown at 12:46 PM No comments: