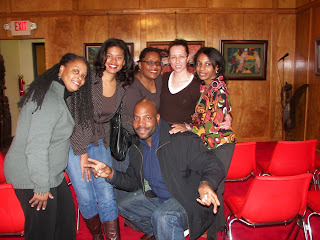 This is a photo is a group shot taken at Atlanta's Shrine of the Black Madonna Cultural Center on Saturday Jan. 27. The pic is, from left to right, of Valerie, who did that amazing biography of Zora Neale Hurston, Natalie H., Roz&Kristina--our Atlanta hostesses with the mostess, and Natalie M. all surrounding Jelani who gets the prize for suffering through not 1, but 2 Tyrone talks in one weekend. Debo's sister Nzinga stopped by, as well as Nat. H's neice and nephew, Kamen and Jadon Rose, our old HU friends, Seth, Mimi, Mia. Also: Ernie, the two Megans, Candice and her mom.
Later we headed to the Water Tree Arts Gallery in Tucker, Ga., where Nat. H's brother in law Ben Rose invited us to do a talk and check out his studio for his new multimedia company Great to meet his business partner Jason, too. Good the see them repping the Midwest in the ATL.
Posted by Unknown at 5:10 PM No comments: 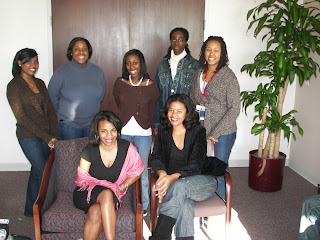 here is a picture with a handful of Spelman students we did a talk with in Cosby Hall on the Atlanta campus. We had a really eye-opening to hear how issues of black masculinity play out on the Atlanta University Center campus. The most dramatic part of the talk came when one of Nat M. childhood friends, MikeFlo, was barred from entering Spelman's highly secured campus--he finally got in but not until having to wait for a half-hour outside. Tyroninity indeed. He felt especially resentful about being treated like a suspect being that he went to Clark Atlanta and is a taxpaying resident just blocks away from campus. The Spelman prof Dr. Cobb took the blame for the incident because he forgot to let the guards know we would be speaking; But he explained that there is a good reason why they keep the campus on lock--all kind of crazies coming on campus jeopardizing the women's safety. One Spelman student piped in that her dad is hassled a lot too, but he's happy beacuse that means his babygirl is safe. It was sweet when one student apologized to him and said she understood how he felt. At the heart of it it was a town v. gown issue relevant to most college campuses, complicated, of course, by perceptions of black masculinity.
Posted by Unknown at 5:30 PM No comments: 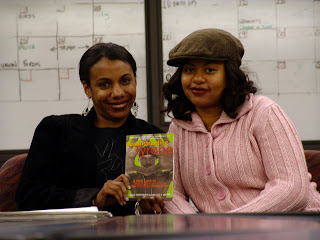 This picture is of The Natalies in the Oregonian newsroom. Thanks, Randy, for the great photo. Nat. M interned at this newspaper 10 years ago. We gave a talk, a brown-bag discussion to the newsroom about the writing process and Tyrone, and making the leap from newspaper writing to book writing. It was really well attended. Then we went out to dinner with a group of journalists as we've done in every city, to find out the latest gossip and trends in the industry. We are happy that the Oregonian seems to be doing better than many and they definitely have a cheerier disposition than most... Thanks for asking us to come in, George Rede!
The only regrets about the book-signing the next day at the Talking Drum bookstore in Portland was that we didn't get a chance to talk to Reggae Bob. The day before we hoped be a guest on his radio show "Good Times," but we got caught up at ETA. We had a great discussion with a school teacher in the audience, a white man who teaches mostly hip-hop-obsessed boys of color, who asked us to suggest some other books that he could share with his class.
We went out to Higgins which is run as a fully sustainable restaurant, featuring only local meat and seafood and outstanding service. Good environmental practices taste delicious..We also went to the famous Powell's Bookstore which did serious damage to our pocketbooks. As we checked out of the world's largest bookstore, the clerk asked us if we found everything we needed. After the Natalies dropped a C-note a piece, we had to say, yes, unfortunately, we did. We did get a cool Powell's shirt for Rudy which he seemed to like.
Thanks to our hosts Emily and Linda!
Posted by Unknown at 10:22 AM No comments: 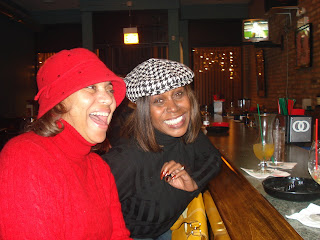 We returned back to Chicago for an event at ETA Creative Arts Foundation in Chicago--where Natalie M. used to do children's theater. We even saw the old drama teacher! JoeMoore mouthed to the Natalie's "no cuss words" before we started reading. Thanks to Tom, Shayne, Corliss, Donna, Kim, Phaedra et al for coming out. Afterward, we kicked it with Chi-town style with Nat M.'s mom Yvonne and her "fun friend" Pat pictured here at a local dive in chicago where the Natalies ignored a sign at the entrance shooing away folks under the age of 35. Felt like old times....
Posted by Unknown at 10:16 AM No comments:

Tyrone--and LeRoy in the Tundra 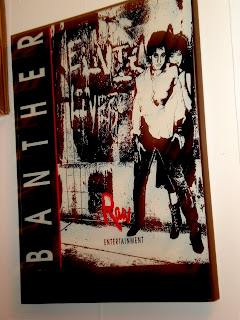 "Welcome to paradise" the pilot from Midwest Airlines (home of freshly-baked chocolate chip cookies)quipped as we landed on the runway of the Twin Cities airport. As soon as we stepped outside the airport and were assaulted by the 6-degree air (minus-15 with the wind chill) The Natalies thought, hmmmmm...maybe not so much. This was Natalie H.'s first time to the tundra and she had to harken back to her childhood days in Edmonton, Alberta.
The weather was literally the ONLY thing we could complain about this stop on the book tour. Our Minneapolis reading at Amazon Feminist Bookstore was by far our most diverse. There were academics, neighborhood folks, students, journalists; white, black, Indian, Native American; old and young. The good people of the Minneapolis Star Tribune gave Tyrone the hook up in the newspaper -- 3/4 of the features section front before jumping inside. About 70 people crammed the basement to listen to the Natalies wax about media images and media agency. Minnesota Public Radio taped the two-hour talk/q&a. (We sure hope that Gary Eichten uses our material.) One black woman from the South talked about whether LeRoy, from back in the day, was the same archetype as Tyrone. We met the filmmaker Rachel Raimist and a Howard alum brother who offered us $50 bucks for our personal dog-eared copies when he learned the books were sold out ("Those are worth even more!") After the sell-out reading, we headed over to the home of "LiquorMan" Steve, an old pal of Natalie M. from her Twin Cities days. He graciously gave us an after party. Toward the end of the night, Steve started remembering his days as lead singer of his band Banther, which was part of the Minneapolis Sound . He even knew a guy named Romeo Blue. This is Steve in the picture from the early 1980s.
And then we met Mary. Mary is Steve's former vocal coach. Minutes after meeting us, Mary offered to serenade us with a song about "making dreams come true."

This must be what folks are talking about when they talk about the thing called "Minnesota Nice" This is the state that just elected Keith Ellison, a black man and the nation's first Islamic U.S. Congressman. He took his oath of office using Thomas Jefferson's Koran, which we learned from a local politico at Steve's party, was done at the excellent suggestion of a lovely librarian who happened to be from Minnesota. Nice.
A middle aged white guy who came up to The Natalies after the signing. "I saw the article in the paper. I said to myself, 'I live in the neighborhood, I should check it out'...I'm so glad I did."
So are we. So are we.
Thanks to Aida, Chris and Gia; Nancy; Gita and Nancy Nova; T.C. for being our limo service; Duchesne Drew; Brock and LaDawn; Erin and the boys; and Chuck.
Posted by Unknown at 2:50 PM No comments: 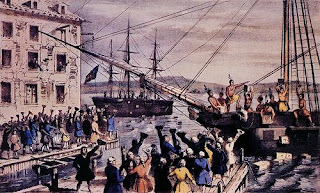 The New Year is here, and Tyrone is definitely feeling a strong gust of wind to his back. DT was featured in the January issue of Ebony Magazine--the one with Will & Jaden Smith on the cover (check out page 32). AOL Black Voices published an excerpt and interview with us. The critic Kam Williams named us #2 in his top-ten list of best books of 2006, while we made the Women & Children First Bookstore in Chicago named bestseller list reported to the chicago tribune, beating Obama. We've done pretty well getting coverage in print media and radio, but now more and more invitations are starting to trickle in for corporate, academic and activist groups for The Natalies to appear for speaking engagements and panels. And we still have book tour events in Minneapolis, Cleveland, Palm Beach, Atlanta, Chicago and Indianapolis and D.C. planned for 2007.
That wind gust is not particularly helpful for Nat. H's 2007 calendar filled with school field trips and PTA meetings--not to mention a dissertation to complete by May, or Nat M. whose freelance writing and college teaching plate is filled to the brim. But clearly these are really wonderful problems for a first-time authors to have and we feel happy to have them.
We went to Boston Dec. 16 at the request of our friend Greg who is a former newsroom colleague quoted in DT Ch. 4 and also went to high school with Nat. H's husband in New Orleans. At the bookstore, Jamaicaway Books in Jamaica Plains, we learned the owner's daughter was a recent HU grad, proving once again, that the mighty mighty Bison are everywhere (insert maniacal laugh here). It seemed our role in Boston was just to set the ball rolling and we were really happy to sit back and listen to the sparks fly. Our reading from DT inspired a bout between a hipster mom and a Civil Rights Generation man, going head-to-head over the value of hip-hop. We hope this means the book will spark similar conversations, debates, and ultimately more understanding for others.
The biggest AHA! moment for Boston came after the reading. The Natalies and several journalist friends were lingering in the store afterward. Now just to preface, journalists are constitutionally a whiny bunch. But as we told truly awful horror stories and tales of being young black professionals, the so-called Gatekeepers, working in The Media we realized that we might just have the workings of another project. More on that later.
Thanks for Greg for hosting us and Keith for the hospitality at that great Italian restaurant in Boston. We were surrounded by so many friends we didn't feel any of the famed chills coming from the CACs living in the home of Crispus Attucks and the Tea Party.
Allison: clearly Boston is not NEARLY as bad as you say...right?
Posted by Unknown at 3:13 AM 1 comment: