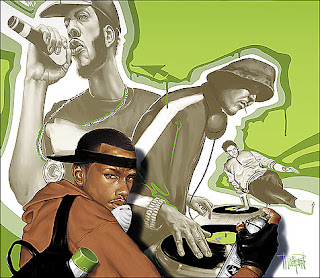 Did we dream it?
Jump off yet another plane, open up the Sunday paper, skip to the Washington Post Book World section and here is this cover illustration for the Jan. 28 issue headlined "The United States of Hip-Hop." Inside are reviews three hip-hop related books, including Deconstructing Tyrone and To the Break of Dawn, a new book on hip-hop by our new BFF William Jelani Cobb. Must be a dream, since we just got back home from kicking it in Atlanta. Also: when Jelani agreed to blurb our book back in Feb. 2006, he jokingly predicted that our books might end up getting grouped together for reviews.
Was NOT a dream, which means that he must be clairvoyant, too...The layout in the print edition of Book World inside had pics of a fedora-and-blinged out Kwame Kilpatrick and other hip-hop generation folk. You can check out the dreamy-but-real review to our book HERE.
Later that week, the Natalies appeared on a panel discussion about black masculinity in hip-hop on Thursday (2/1) at the Smithsonian's National Portrait Gallery which followed an advance screening of "Beyond Beats and Rhymes," Byron Hurt's fantastic documentary which will have its PBS premier on Feb. 20. Michael Eric Dyson was supposed to appear on the panel with us and Byron but he had a last-minute scheduling conflict. We still had a great discussion.
Well folks, our Tyrone done made it to the Smithsonian. Whodathunkit?
Posted by Unknown at 10:12 AM

Hello Queens,
As a sign of respect, I tip my hat to both of you for your insightful efforts to engage critical thinkers in what I hope has been meaningful dialogue.

The question I hear a lot of women, and men, asking is "Am I Good Enough?" The collateral damage from our loss of cultural integrity is devastating entire generations of great people.

If interested, "The Power Of A Wise Woman's Words," "The Original Down Low Brother," and "Am I Good Enough?" can be located at http://www.whenleastexpected.com.